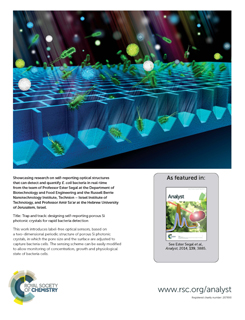 The task of rapid detection and identification of bacteria remains a major challenge in both medicine and industry. As current bacteria detection methods rely on lengthy laboratory-based techniques, there is an urgent need for developing biosensing platforms that will allow for rapid detection at point-of-care settings. Our lab designs different optical biosensors that can detect and quantify bacteria in real-time.

The sensor is based on a two-dimensional periodic structure of porous Si photonic crystals, developed in collaboration with Prof. Sa’ar from the Hebrew University, in which the pore size is adjusted to fit the target bacteria cells. Bacteria capture within the pores using different surface functionalities measurable induces changes in the zero-order reflectivity spectrum collected from the periodic structure, as shown below.

Confocal laser microscopy and electron microscopy confirm that the target bacteria cells are individually imprisoned within the porous array. A simple model is suggested to correlate the optical readout and the bacteria concentration and its predictions are found to be in good agreement with experimental results.

In addition, we demonstrate that sensing scheme can be easily modified to potentially allow monitoring of concentration, growth and physiological state of bacteria cells. This generic platform can be tailored to target different microorganisms by tuning the array periodicity and its surface chemistry for rapid and label-free detection outside the laboratory environment.

High-resolution scanning electron micrographs of the biosensor, demonstrating bacteria cells confined within the pores. Some of the bacteria cells are false-colored to ease observation.

We have developed label-free biosensors based on two-dimensional photonic crystals of periodic micron-sized pores and pillars. The spacing between the structures allows for bacteria capture, inducing measurable changes in the zero-order reflectivity spectrum collected from the periodic structures.

The optical signal allows for real-time readouts of bacterial responses and activity, such as growth and death. Thus, in collaboration with Bnai Zion Medical Center, we have recently demonstrated that these sensors can be used as a platform for rapid antibiotic susceptibility testing in order to determine the most effective antibiotic for an infection. While in the clinic this test takes more than 8 hours, in our platform, the assay takes 2 hours to perform, encouraging the correct prescription of antibiotics to ill patients in a timely manner. Nanostructured porous silicon (PSi) Fabry–Pérot thin films are used as the optical transducer element to monitor changes in the reflectivity spectrum upon target bacteria binding. We have established the feasibility of antibody-conjugated oxidized PSi for optical detection of bacteria via the ‘direct-cell-capture’ approach (Massad-Ivanir et al., 2010, 2011).

Exposure of these biosensors to the target bacteria results in their capture onto the porous surface, inducing predictable changes in the thin-film optical interference spectrum of the nanostructure, i.e., a decrease in the intensity of the reflected light, allowing for rapid detection of low bacterial concentrations.

Recently, we used a novel peptidemimetic compound, as the recognition element (Tenenbaum, 2015). The sequence K-[C12K]7 (referred to as K-7α12, shown below), which is a synthetic antimicrobial peptide is tethered to the porous nanostructure. The K-7α12 compound is a member of a family of oligomers of acylated lysines (OAKs), mimicking the hydrophobicity and charge of natural antimicrobial peptides.

Changes in the reflectivity spectrum of the biosensor are monitored upon exposure to different bacteria and their lysate suspensions. We show that capture of bacterial cell fragments induce changes in the reflectivity spectrum, proportional to the E. coli concentration, thereby enabling rapid, sensitive and reproducible detection of E. coli at concentrations as low as 103 cells per mL. 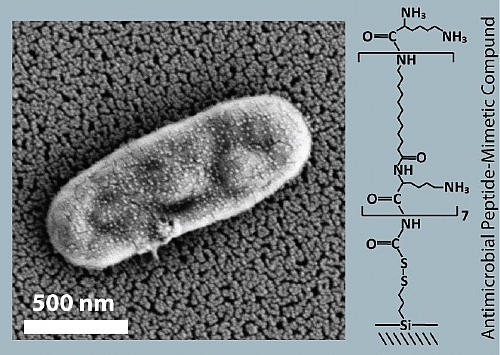 The emergence of antibiotic resistance of pathogenic bacteria has led to renewed interest in exploring the potential of plant-derived antimicrobials e.g., essential oils (EOs), as an alternative strategy to reduce microbial contamination. However, the volatile nature of EOs presents a major challenge in their incorporation into polymers by conventional high-temperature processing techniques. High-resolution scanning electron micrograhs of neat HNTs (prior to hybrid formation) and A schematic illustration of halloysite nanotubes (HNTs) loaded with carvacrol molecules (a model antimicrobial EO) as achievedby a pre-compounding step in which HNTs/carvacrol hybrids are produced.

The resulting polymer nanocomposites exhibit outstanding antimicrobial properties with a broad spectrum of inhibitory activity against Escherichia coli, Listeria innocua in biofilms, and Alternaria alternata. Their antimicrobial effectiveness is also successfully demonstrated in complex model food systems (such as soft cheese and bread). This superior activity, compared to other studied essential oil-containing films, is induced by the significantly higher oil content in the film as well as its slower out-diffusion from the hybrid system.

Storage experiment of fungi-inoculated sliced bread (preservative-free) demonstrating complete eradication of the fungus when the bread is stored (11 days) in a package based on our new antimicrobial hybrid films. 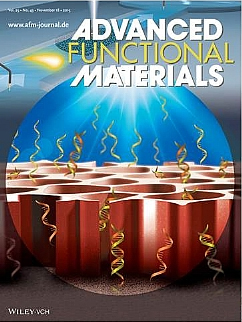 Recently, we demonstrated a highly-sensitive lab-on-a-chip device for DNA and protein detection. The DNA/protein target molecules are focused using an electric ﬁeld within a ﬁnite and conﬁned zone, and this highly concentrated analyte is delivered to an on-chip PSi Fabry–Pérot optical transducer, pre-functionalized with capture probes. Using reﬂective interferometric Fourier transform spectroscopy real-time monitoring, a 1000-fold improvement in the limit of detection (LoD) is demonstrated compared to a standard assay, using the same biosensor.

A measured limit of detection of 1 × 10 −9 M and 7.5 nM is achieved without compromising speciﬁcity for DNA and protein target respectively. To the best of our knowledge, this is the lowest LoD measured to date by any PSi biosensor for DNA.

This is the first time that electrokinetic isotachophoresis (ITP) technique has been applied for DNA and protein focusing on PSi biosensors, as well as the utilization of immobilized aptamers as capture probes in an ITP assay.

In addition, the assay is successfully performed in complex media, such as bacteria lysate samples, while the selectivity of the biosensor is retained. 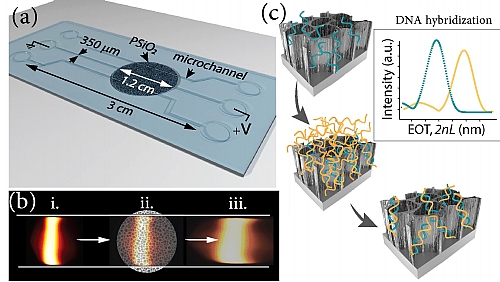 The concepts presented herein can be readily applied to other ionic targets, paving way for the development of other highly sensitive chemical and biochemical assays.